I am not sure if it is a mid-life crisis, a need to return to my youth or just the desire to play games with other people rather than just solo games
but recently I decided to get back into Warhammer Fantasy Battle.

I wanted to play games with Samantha (my wife) and thought WFB would be good.
With my own Burning Sands world/rules I would get upset if she was not super serious about the lore and the immersion.
With WFB however if she wants silly names for her units that is OK with me, it is not my proffered style so my own units will be fairly serious.

However as long as we get to play then all is good.


I opted for WFB as I played it as a kid and I know the system pretty well, plus also myself and a couple of friends have been playing WFRP, so if they want to dip into WFB they will have some experience of the setting and rules.

I tracked down a copy of 3rd Edition on eBay and now own a tatty but serviceable copy of the rules.
I went for 3rd edition as it is familiar, being the rules I first properly got into wargames with.
Back in the day we used some house rules and we will be doing so this time around.

The main house rule is to limit wizards to level 5, so that means only level 1 magic.
Plus a few others such as spells being autocast and dropping a few rules around troops, nothing severe and all with a mind to make it a bit more tactical than zippy zappy cast ravine your army falls down a hole sort of gaming.

Oh yeah!!
We are doing it in 10mm as it is cheaper and takes up way less space.
I am converting inches to centimetres as it is about the same ratio as 10mm figures vs 25mm figures, with 1 inch being roughly 2.5cm.

There will shortly be some pages about my army which is Empire Inspired and Samantha’s Dark Elves.

When the images appear below  you can click them to check out the armies.

As always, I have a topic on The Wargames Website and you can check that out HERE 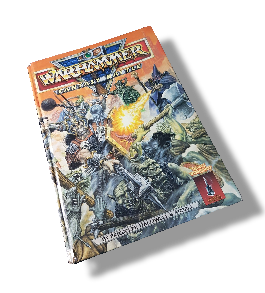 CLICK THE ABOVE IMAGE TO VISIT MY EMPIRE PAGE