My Empire army is truth be told, more Empire inspired.
It is based on but does not faithfully follow all the Warhammer Lore.

This is for a few reasons, it requires less research and it allows me to change things I don’t like.
Having said that, it should be recognisable at a glance.

I have drawn my units from a certain part of the Empire as shown below:

I chose this after starting painting.
I had a look online at colour schemes and plumped for red / white as the main one.
Then thinking of going a bit more official in terms of lore I hunted the net for what parts of The Empire used white and red, so that is how Talabecland was chosen.

I noticed there was a lot of yellow in the uniforms for the various provinces and with my yellow paint not being all that I tried to avoid it.
Having said that it was not so easy a task and so my skirmisher archers are from Stirland which uses green and yellow a bit.

Talabecland will be a good bulk of my forces including the glorious artillery!

Stirland will be mostly just the archers.

Ostermark will make up about as much as Talabecland, I like their dark rust red colour with white and black.

Finally is Sylvania which would have been my province of choice were they not so anti-gunpowder.
I suspect they will provide some of the more esoteric units of the army…

The Pendraken models with shields mostly have a dragon on them, which was one of the reasons for thinking about making Sylvania the main force until I read about their fear of the new.
So I figured that the dragons on the shields could pass as Ostermarks Griffin, which to me looks quite dragonlike:

As I mentioned in Humble Beginnings I had decided to try and make small movement trays so they did not
take up too much space and detract from the figures.
BUT I was then faced with the issue of what colour to paint the edges, too small to flock it would be a lick of paint.
What colour, goblin green and old school, brown to match the edges of my hills, black to match the actual
bases of the individual figures?


So here we have an example of a painted and trayed up unit, not realistic but I decided early on that I wanted a certain visual appeal that did not need to be hyper real. 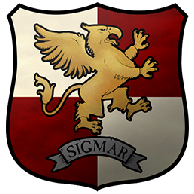 With my army almost complete I am uploading the units, I suspect I will add details around them later in terms of their history and notable people in the unit.
Until then, just the pictures:

Commander of the Allied Contingent

Magister of the Amethyst Order

Knights Of The Black Rose